Christchurch sporting events at Hagley Oval have gained some extra shade with the addition of Shade7's giant Tempest outdoor umbrellas. Spectators can now enjoy some relief from the blazing sun throughout the day.

Known for its heritage, chill and horizon of snow covered mountains, Christchurch stands as New Zealand’s largest South Island city. The city had been founded in 1856 establishing Christchurch as the oldest city in New Zealand. Within the founding stories of Christchurch lies the acclaimed Hagley Oval. In 1867 on the open field, townsfolk and players came together for the first province match between Canterbury and Otago thus giving birth to the “spiritual heart of cricket in Christchurch”. Known to be New Zealand’s most impressive club cricket venue and “A Ground for all Generations” the park can host no less than six club games at once hosting 50,000 players over their summer Saturdays.

As Hagley Oval has been recognised in more recent years as a major international venue, hosting the opening ceremony for the ICC Cricket World Cup 2015, the club has sought improvements to impress the drawing crowds and support the facility quality of the fields, while providing much needed shade from the Christchurch sun on an open field. The community at Hagley Oval had sought out our local reseller ShadePlus Christchurch who are well educated and knowledgeable in the supply and installation of sails and outdoor umbrellas, to advise on what would be the appropriate solution for the large open area.

Upon the conclusion that a Shade7 Tempest commercial outdoor umbrella would be the appropriate product to achieve the task of value adding/mirroring and shade provision, the board at Hagley Oval and staff at ShadePlus decided that 6 of Shade7’s 5m by 5m square Tempests would do the job. The umbrellas have been installed in a separate fashion to provide two areas of shade across the ridge circumnavigating the boarder of the boundaries shading a total area of 150m2.

The Tempest outdoor umbrella boasts a 94mm mast with internal reinforcement allowing the umbrella to withstand wind gusts 80-100km/h when open. Being atop of a slight ridge exposes the umbrellas to strong wind where this durability is highly valued. The heavy duty hubs, arm connectors, and PVC fabric allows Shade7 the confidence in calling the Tempest outdoor umbrella “simply the best non-permanent umbrella of the market today”, and confidence in the performance of the Tempest.

By ordering the Tempest umbrellas with white PVC canopies, Hagley Oval can enjoy the benefits of an 80 UPF rating, protecting spectators from the maximum amount of harmful UV light. As the canopy is waterproof through a welded commercial grade fabric, cricket goers can enjoy the game without getting wet by the odd shower. The PVC canopy is also 0.6mm thick supporting the durability of the Tempest umbrellas and their flexibility to adaptation of environments.

Shade7’s umbrellas continue to grow their presence in the commercial market meeting the various needs of organisations. Metlifecare in Auckland have also utilised the strength and size of the Tempest commercial umbrella’s at one of their newest retirement villages. Contact Shade7 to discuss how the Tempest or any of their umbrellas could be of benefit to your home or commercial project.

SHOWN IN THIS SETTING 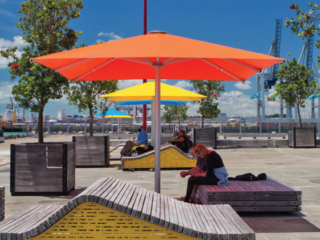